How to Verify Objects (and Simplify TDD) using ApprovalTests.Swift

ApprovalTests for Powerful Assertions in Swift: How to Get Started

Say you have a project named SampleProject. And you want to create a new unit test suite. So you Command-N to make a new file, and select “Unit Test Case Class.”

If we give it the name AppleTests, here’s what Apple provides:

It’s instructive… the first time. After that, it’s only noisy. So I use a customized file template for new unit test suites. Command-N and select “Swift XCTest Test Suite.”

It suggests a file name ending with Tests. If we give it the name QualityCodingTests, here’s what I provide:

Curious about the problems I have with Apple’s template and the decisions I made for my custom template? Read on…

If you select the template, Xcode displays a large dialog: 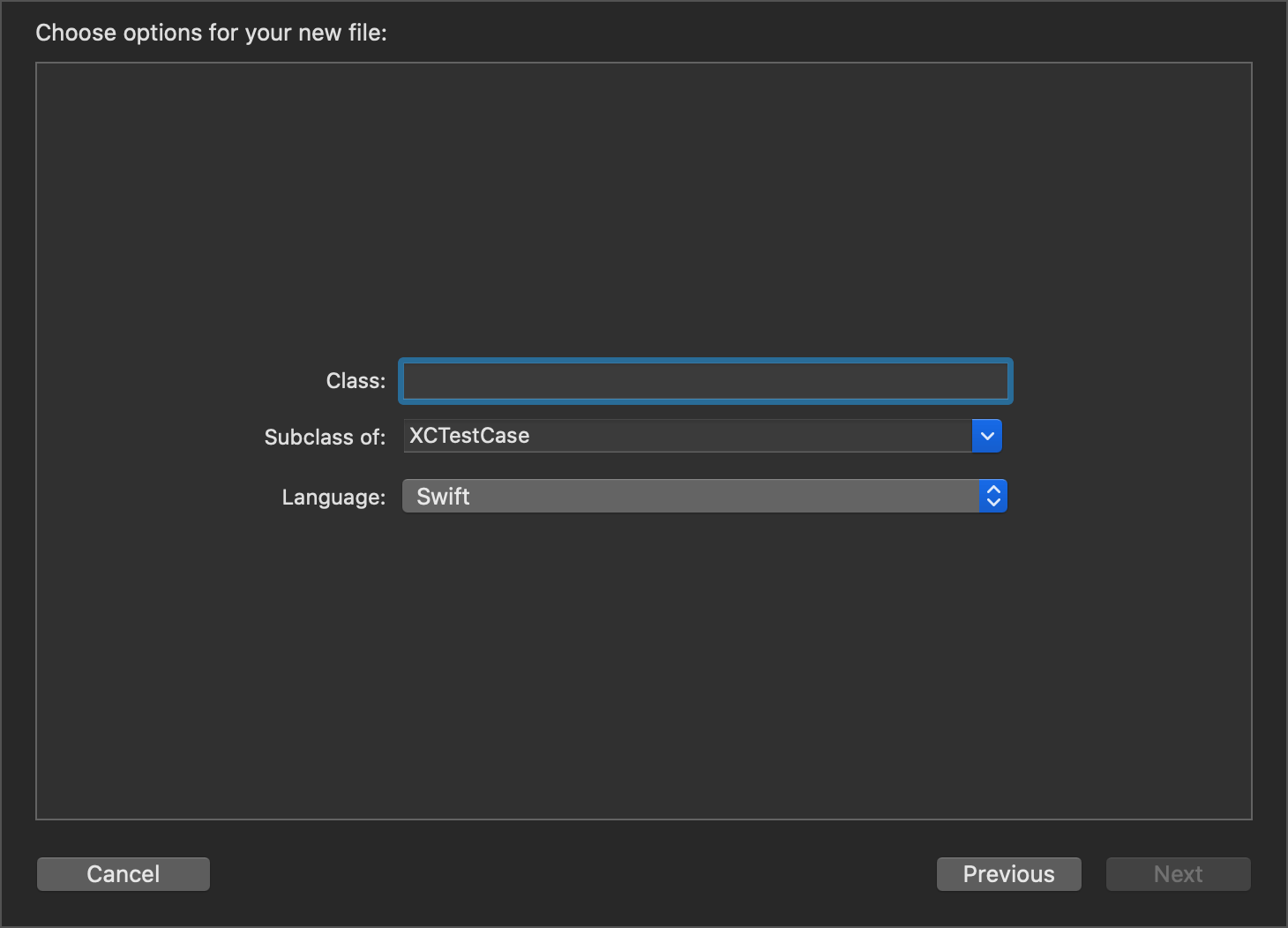 What do we get next? Another dialog. Xcode prompts us for the location, group, and target.

What do you do with these? I delete them, every time. They serve no useful purpose in a project. Even if you work at a company that requires a standard file comment block at the top of each file, it doesn’t look like this. Delete.

This is incomplete. To access your production code, you need to @testable import the module.

Placeholders for Set-Up and Tear-Down

After the class declaration, we get placeholders for set-up and tear-down:

These are instructive, with explanatory comments. But I prefer not to create set-up and tear-down when I start creating a new test suite. I don’t want to make assumptions about what belongs there. Instead, I code a test, then another test. Then I can begin to see what might belong in set-up.

Set-up is there to serve the tests. Wait until you have tests so you can discover what belongs there. Delete them, comments and all.

You may resist the idea of deleting these function placeholders. You may want them there because you don’t want to type them in later. That’s where my test-oriented code snippets come in. I’m lazy, and don’t enjoy typing the same things over and over. So my code snippets define: 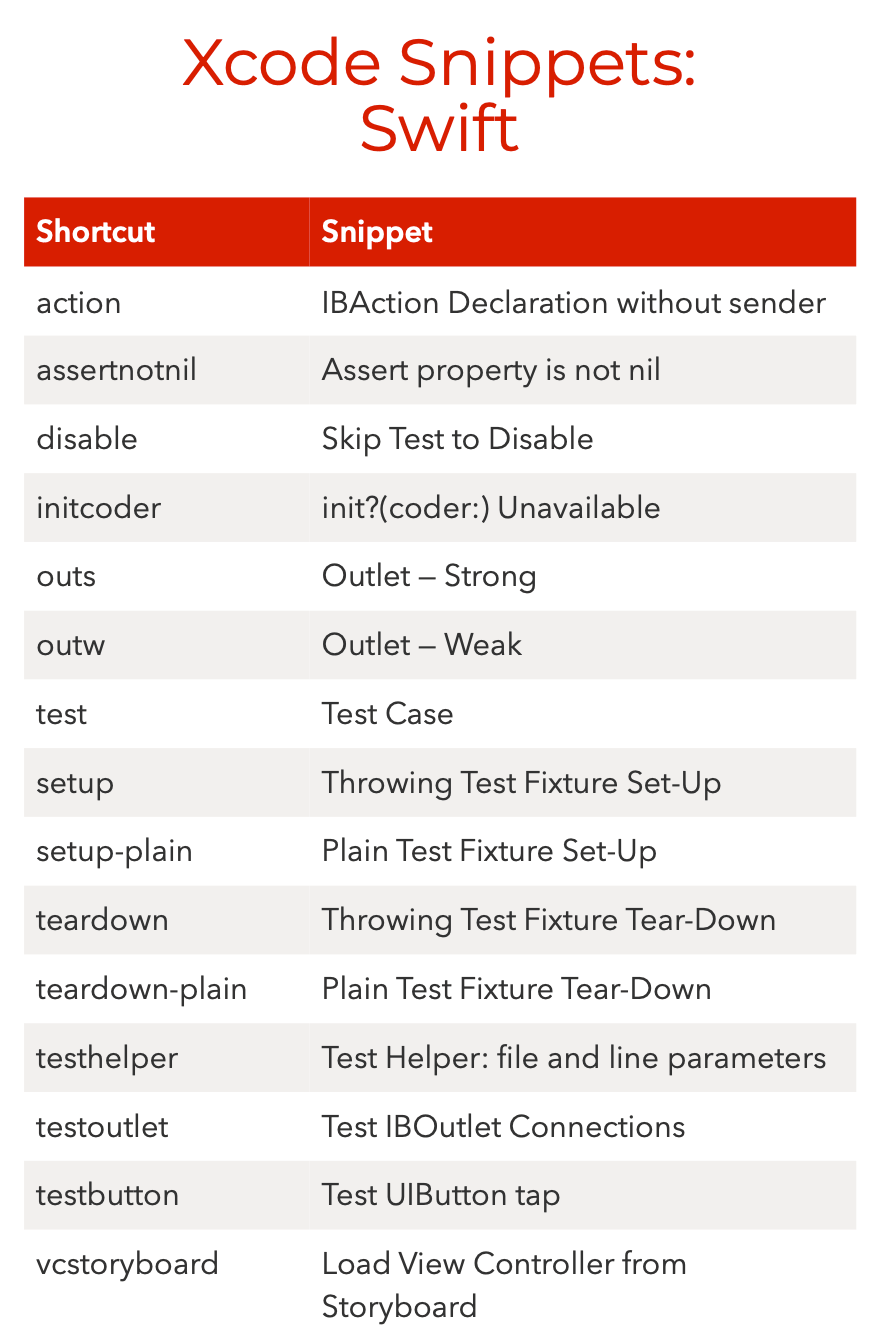 These code snippets are available separately by subscribing to Quality Coding:

Finally, we get a place to put our test. But again, they are mini-tutorials:

Instructive code with explanatory comments is nice the first time. After that, it’s noise. I want to start writing a new test case by typing something new, not by deleting comments.

And can I tell you how many performance test cases I’ve written? Zero. They probably have their place, just not for my needs. Delete.

I want less code, not more.

What’s In My Template?

Now let’s look at the workflow of my “Swift XCTest Test Case” template.

Here’s what Xcode shows when you select my template: 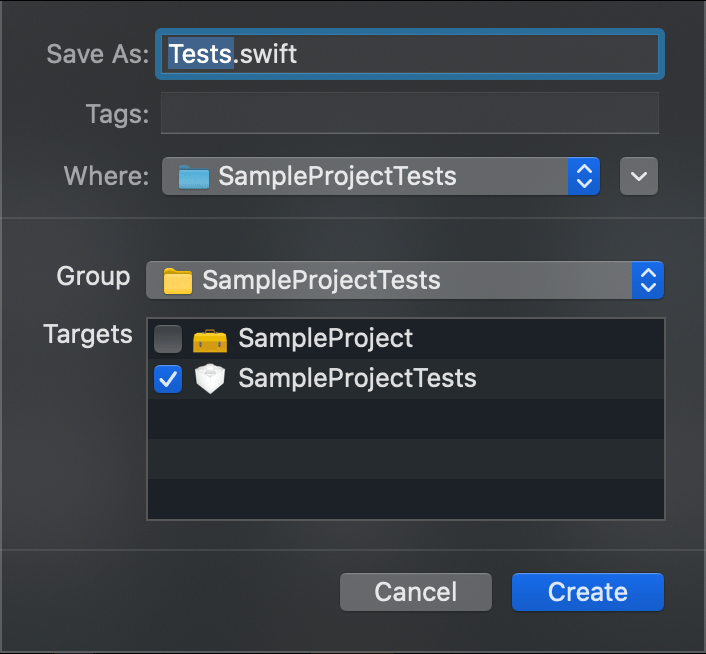 First, notice that it suggests a naming pattern. I use the suffix Tests to name test suites because a test suite holds a group of test cases. Just hit Up-Arrow to move the cursor to the beginning of the field, and start typing the rest.

Note that it doesn’t ask you what to subclass, or what programming language to use. You already selected “Swift XCTest Test Case” so we know. (The download also includes an Objective-C version.)

Then specify the location, group, and target.

The file doesn’t start with a file comment block. There’s nothing to delete. Move along, move along.

The first thing in the file is not one, but two import statements:

The file template makes an educated guess about the name of your production code module. It assumes it’s the same as your project name.

This isn’t always true, of course. But even when it’s wrong, at least it shows that you should use @testable import to access the production code.

The class declaration has a subtle difference from Apple’s template.

I like to declare my test suites as final. Why? It’s very unusual to subclass test suites, so we don’t need dynamic dispatch to call test helpers. Private test helpers become direct function calls instead of dynamic messaging.

I doubt this makes much difference. But why leave any performance on the table? I want tests to run as fast as they possibly can.

Before I write the first test, I like to execute what I call Test Zero:

This is a trick I describe in my book iOS Unit Testing by Example. Test Zero helps check that the new test suite does nothing well. It’s the first check of our new infrastructure.

Once the test fails correctly, I delete it. Then using my test-oriented code snippets, I type “test” to begin writing a test case. The test suite is gloriously empty.

I’m a lazy programmer and don’t want to waste my time deleting things I don’t need, and typing things I do need. I hope you find my XCTestCase file template useful!