When you’re hiking and don’t know which way to go, what should you do? Stop. Get your bearings.

The same applies to Test-Driven Development; sometimes you need to stop doing TDD, and get some answers.

Those answers can come by switching from clear code to a style of quick-and-dirty hacking called a “spike solution.” I explained the basic idea in How to TDD the Unknown with a Spike Solution.

The key thing is to learn what you need, then get out. Don’t try to use the code from your spike solution; it’s dirty on purpose. Ultimately, we want to switch back to writing clear code, driven by tests.

Don't try to use the code from your spike solution; it's dirty on purpose.

As I explained in TDD Sample App: 20 Topics that May Spill Out, the main thing I want the Marvel Browser app to do is pass a name prefix to the Marvel Comics API and get comic book characters back. There are two things I’m uncertain about: how the NSURLSession works, and how Marvel handles request authentication.

This post is my way of letting you look over my shoulder so you can see how I do things. Then let’s see if any techniques emerge for spike solutions in general.

Where To Put It?

The template project shows a view, so I put a breakpoint on -[ViewController viewDidLoad] to make sure it’s hit when I build and run the app. It is hit, so let’s play there.

Now normally, networking code should never, ever be present in view controller code. I will address this in a series on iOS Architecture, after this post. But for a spike solution, dirty code is fair game.

I created a branch called “spike-networking”. Mainly, I want to avoid having the spike solution go into the master branch. But I also want you to have access to it, so I’ve pushed the branch to the GitHub repo. If you want, you can follow along commit by commit.

The Marvel documentation has a helpful page on Authorizing and Signing Requests. It includes a warning to keep the private key private. Since I am making my code public, I don’t want to check it in to MarvelBrowser repo. Instead, I made a file MarvelKeys.m that looks something like this:

To keep it out of the repo, I added MarvelKeys.m to the .gitignore file.

(In a true production app, I would also want to obfuscate the private key in some way. But that would be a silly thing to do when the code is open for anyone to see.)

On the Authorizing and Signing Requests page, we’re interested in the section called Authentication for Server-Side Applications. Apparently, we need to concatenate a timestamp, the private key, and the public key. This will will be crunched into an MD5 digest, so it needs to be a plain C string. Even for a spike solution, I want to work in small steps, verifying things manually:

As you can see, I don’t even care about generating a proper timestamp; a hard-coded value will do fine. I build, run, and check the log to manually confirm that it shows the concatenated string I expect.

Now I need to create an MD5 hash of the concatenated string:

Running this with a breakpoint, I see that digest is getting filled with data, but it doesn’t look like anything that can be passed in a URL. Oh wait, we need to convert it to hex digits. A quick search on the Internet yields a solution which I copy and paste:

Since we want a 32-digit hexadecimal number for MD5, let’s log it and check:

So far, so good. Since my warnings are beefed up, I do get a warning about integer precision. Do I care? No.

Now let's create a URL string to search for character names starting with “Spider”. I'm combining what I see about authentication with their Interactive API Tester:

Build and run. So far all I have to go on is visual verification, but things look okay as far as I can tell. (In fact, I just introduced an error but don't discover it until I actually call the Marvel Comics API.)

I could have specified nil as the delegate, but I tried self because it seems like a common pattern. AppCode then warned me that the class doesn't conform to a protocol, so with a quick Option-Enter, I let AppCode generate the required declaration:

But there were no further warnings here, so I learned that this protocol contains only optional methods.

Again, I'd never have a real view controller implement that protocol. But the purpose of the spike solution is to learn.

Okay, let's add logging to the completion handler, and actually fire off the task:

According to the "Authorization Errors" section of the Marvel page, there are a few possible causes of a 409 error. Maybe the logged data will tell us more:

Copying the part between angle brackets, I paste it into 0xED, my favorite hex editor:

Now I can read the JSON response:

The hard-coded timestamp value shouldn't be a problem. But it's not getting through somehow. Let's use AppCode's refactoring to Extract Variable and examine the URL:

I examine the logged URL, and ah! I have a question mark that doesn't belong. Let's remove that, try again, and… success! I'm now getting a lot of data, and the response shows a successful status code of 200. Copying the hex data and pasting it into the hex editor, I now see: 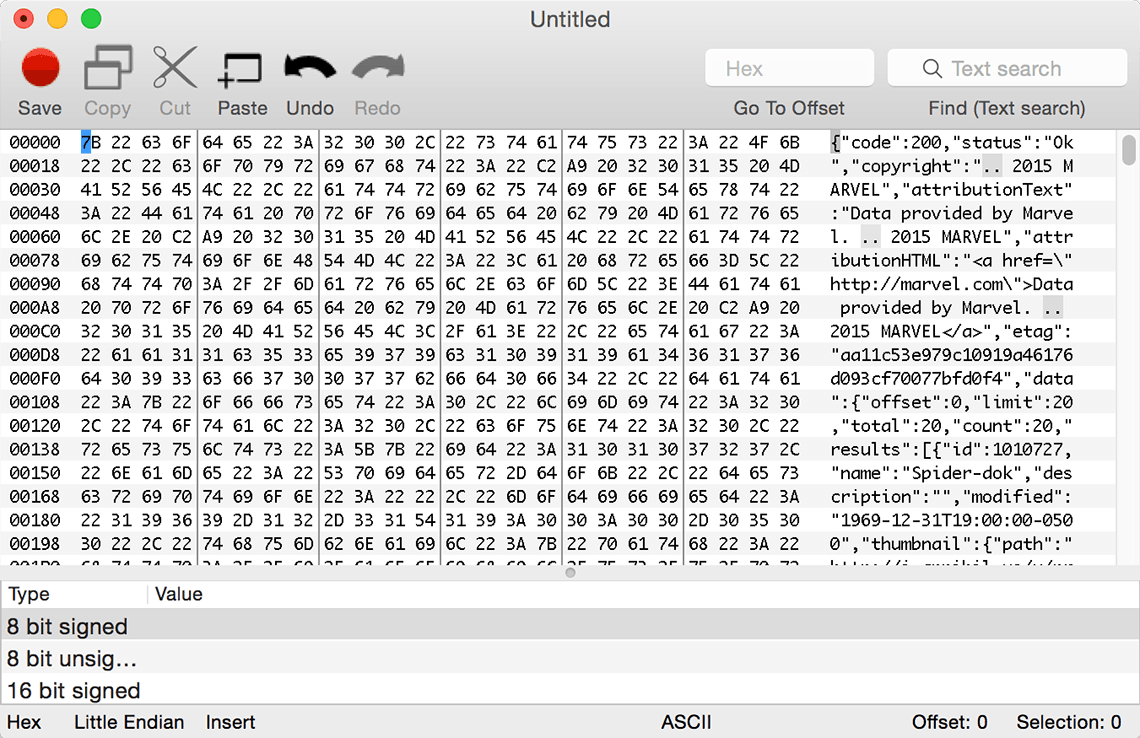 It looks valid, but there are some unprintable characters in there that I don't trust. Let's copy the text from the right hand portion and paste it into a JSON parser, like Json Parser: 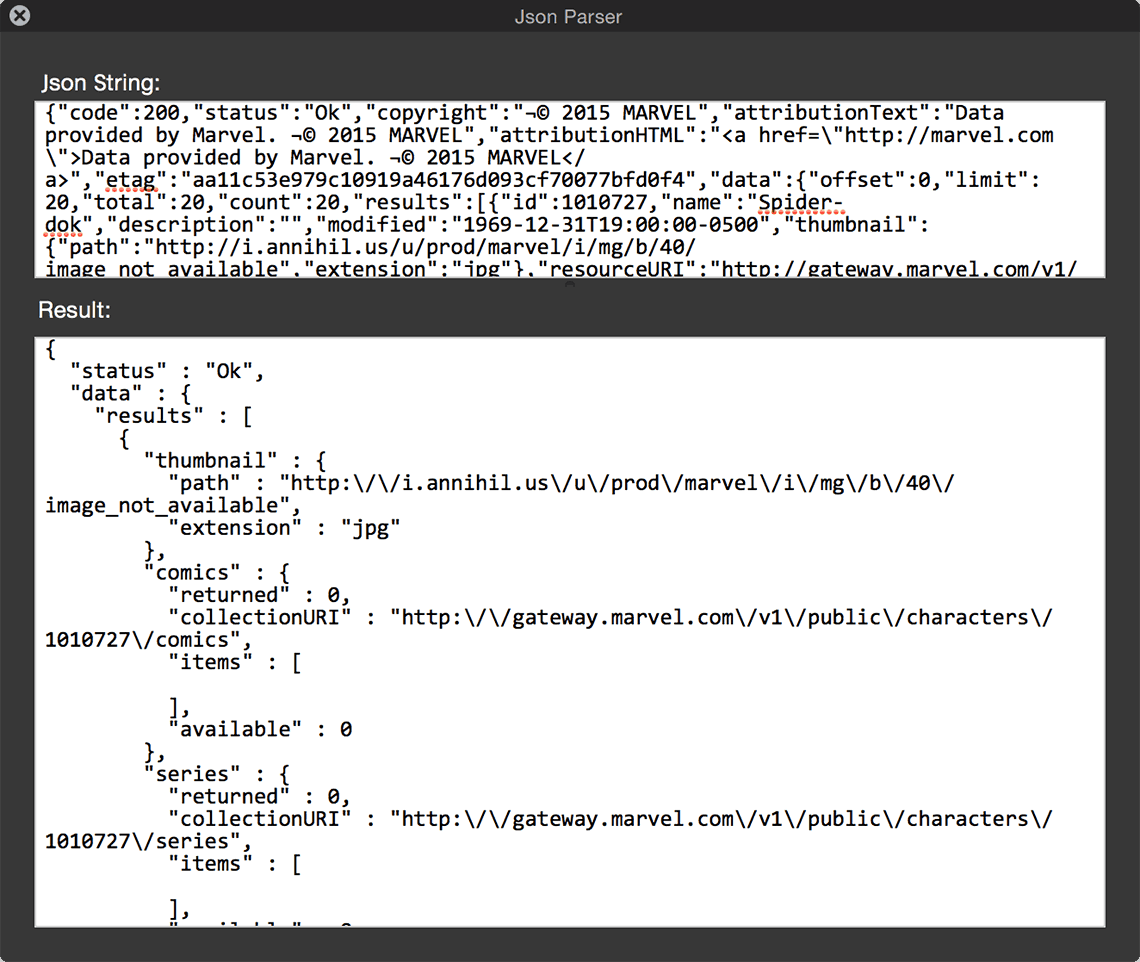 Hurrah, no errors! Our spike solution is done.

7 Techniques in My Spike Solution

Looking back, here's a summary of the techniques I used while developing this spike solution:

Did any of my techniques surprise you? What are some techniques you use for spike solutions? Leave a comment by clicking here.

How to TDD the Unknown with a Spike Solution