How to Safely Parse JSON into Swift Immutable Models with TDD

How can we unit test JSON parsing, handling every possible error? Can we generate immutable models? And for Swift, how can we keep our Response Models free of optionals?

Of course, there are many JSON parsing libraries out there. Plug one in, define all fields as non-optional, and you’re good to go! …Until your app crashes, because something was different in the actual JSON data.

Unlikely? “The backend team would never do that to us”? I’ve had a released app crash because the backend folks changed one field from a string to an integer. I’ve seen app development and QA forced to pause because a commit assumed all fields were non-optional. (It crashed on the missing field, because hey, Swift.)

So let’s look at a pattern that will help us

Even if you never plan to do your own parsing, we’ll learn things along the way about design and testing.

Note: These days, I just use Decodable. But read on if you want to learn about construction builders.

I often see unit tests like this for JSON parsing:

This may be a fine acceptance test. But we can do better for unit testing. Here are the things I find problematic:

These problems all point to the same thing: the test is too big. How can we break it into smaller parts?

Construction Builder to the Rescue

Here’s the one-line description of the pattern:

Incrementally create an immutable object with a builder that stores constructor arguments in fields.

In a Construction Builder, each field can be set independently of the other fields.

This is the clue we need. We can first parse a flat structure into a set of fields. “Parse this field. Then that other field.” The tests can focus on one field at a time. And we’ll have tests to drive handling of unexpected JSON types.

Finally, everything is assembled into an immutable object. The build step can confirm that we have every field required. 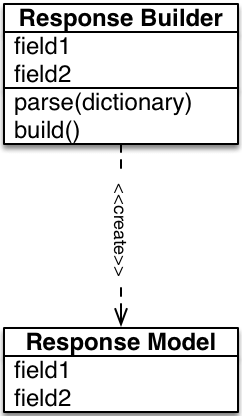 Here, ResponseModel has two immutable fields. We define a corresponding ResponseBuilder, but its fields are mutable and optional.

The parse method decides how to set each field. It will:

The build method creates the ResponseModel. It will:

Let’s say the first field is numeric. Here’s how I’d parse it in Swift:

It’s straightforward: If there is a dictionary entry, and it can be downcast to an Int, do so.

In Objective-C, things are wordier. Having TDD’d the need for fields of different types, here’s part of what I refactored to:

We can potentially extend QCORequireNumber to handle the string-to-number conversion. Remember my story of the shipping app that started crashing due to a JSON type change? After that, I began adding forward compatibility with defensive string-to-number and number-to-string converters.

Once parsing finishes, the build method can check to see if it has all required fields. In this Swift example, we return nil if anything is missing. But if all is well, we call the initializer:

Here’s the same thing in Objective-C, with a slight twist. field1 is an NSNumber in the builder, so a nil value means “we didn’t get valid input for field1.” But in the response model, it’s easier to use C types instead of NSNumber. We’ll have build  handle that final conversion:

What About Nested JSON Data?

So far, we’ve only looked at a flat example. How can we use Construction Builders to parse JSON for more complex data?

For each nested data structure, we define nested builders:

Let’s focus for now on the object at the top center. In CharactersSliceResponseBuilder, offset and total each have their own properties for incremental construction. But what is the type of results? It’s an array… of what?

It turns out to be an array of builders for the next level:

While writing the Swift version, I discovered that I could simplify the code by changing the parse methods to initializers.

Then, I needed tests to drive handling of nested data. First, I wanted to handle an array with a single item:

With TDD, the production code to pass this test has no loops. We tell ourselves, “Forget looping for now. Let’s solve this little bit first.”

The second test has two items. This drives us to iterate the array, not just take the first element.

Once this second test passes, we can delete the first test. It was a “scaffolding” test, and is no longer needed.

If the input isn’t an array, the captured array should be nil:

Finally, what if the input is an array, but not everything inside is a dictionary? Let’s ignore non-dictionary entries:

I encourage you to try TDDing the initializer. Do one test at a time, writing the simplest code that passes. Then see what you can refactor. Remember to keep everything green during refactoring!

What does the build method look like when we have an array of builders? Basically, we call build on each sub-builder, and put the results into an array:

I arrived at this production code thanks to various tests which investigate CharactersSliceResponseModel. The tests focus on the characters array. Now the initializer requires offset and total, but the tests don’t care about those fields. Specifying them over and over in the tests is a problem, because

To solve this, I extracted a test helper:

Here’s an example of a test that uses it:

I’d still have to change a few tests if I add a new required field. But thanks to the helper, not that many.

Here’s that diagram again of the relationship between the Construction Builders and the Response Models:

I want to guard against a few more edge cases:

These both indicate a problem in the data provided by the backend service. So what I’ll do is pretend I received a 500 code for “Internal Server Error”.

For Objective-C, the outermost response model contains the code, the status, and the slice. So the edge cases above can be handled by the FetchCharactersResponseBuilder.

But there’s one last edge case: What if the JSON is malformed and can’t be parsed?

The outermost Construction Builder is initialized from a dictionary. The JSON is already parsed before then. Let’s initiate the parsing from a standalone function:

If the JSON parsing fails, object will be nil. But a builder will still be created. When it calls build, there will be no code set because there was nothing to parse. Then end result, validated by a test, is that we’ll get a 500 error code:

But it’s best to package the response differently in Swift. We don’t want downstream code to check whether the code is 200 or not. We simply want success or failure. (And for a successful response, we really don’t care about the status message.) So the Swift version of the FetchCharactersResponseModel is

The FetchCharactersResponseBuilder handles one edge case. When there is no data, we’ll return a “Bad data” error:

It presumes that the code has already been confirmed to be 200. So the standalone function takes care of:

Even if you avoid all this by using a JSON library, I hope this exercise has illustrated some TDD principles:

Have any questions or feedback? Please share your thoughts in the comments below!

There is no TDD rule saying, “Don’t do any design.” We need *just enough* design to proceed.