Is Apple Stuffing Your Code with Pointless Cruft?

I have a confession to make. My code is clean. My email inboxes are nearly at zero. But my physical inbox, on my nightstand?

Oy vey. I don’t want to show you. Instead, here’s an image illustrating what my physical inbox feels like, when I stop to notice it:

It’s not like I mean to have a pile of clutter. But you know, it’s death by a thousand cuts. One item at a time, that corner of my life is becoming more cluttered.

As a protection mechanism, I’ve even stopped noticing the pile. But many of those items were put there by my wife, to make it clear that that item is my responsibility.

How about your source code?

Xcode Warnings: Turn Them Up to Eleven!

What if there were a way to get feedback on your code every time you compiled?

As developers, we depend on feedback to tell us how good our code is. That’s why I’m passionate about unit tests and TDD: they give me feedback quickly, and the feedback is so good that I’ve come to depend on it. Unit tests are faster than manual testing, and faster than acceptance testing. But there are forms of feedback that are faster still…

I’ve seen crashers ship which could have been prevented altogether, simply by enabling more compiler warnings. The sooner you detect a problem, the cheaper it is to find and fix. So let’s all dial up our Xcode warnings to catch more problems at compile time. …But how high should the warning settings be? This Is Spinal Tap: “These go to eleven.”

What’s a technical skill that will increase your effectiveness, but isn’t programming? How about: being efficient your source control system’s command-line interface? Even though I’ve used Git for a while, there are some things I’ve picked only recently that have made me more efficient.

Did you ever have a time when you were using a hammer, slowly driving in one nail at a time? Then along comes someone with a nail gun and BAM BAM BAM, they’re done! …That’s what comes with using a more powerful tool. We use source control systems every day, yet many of us slowly click on things in a graphical UI, or slowly type out commands in their entirety.

The more you equip yourself with good tools and learn to use them well, the better you’ll be able to stay “in the flow” of development. For example, time spent learning keyboard shortcuts for Xcode quickly pays off. In the same way, the better you can use Git (or whatever you use for source control), the more it gets out of your way, letting you concentrate on the actual coding.

So I want to show you 6 simple things you can use to improve your Git workflow — a set of Git power tools. These tools generally involve one-time setup (except for one that is a fun, game-like tutorial). Put these tools to use, and you’ll find you can get more done, more quickly.

AppCode is an alternative IDE for Objective-C development. When it comes to test driven development, it’s superior to Xcode. But that’s not all. Check out the “inside-out” coding style it makes possible.

In general, AppCode lets me focus more quickly on semantics and less on fiddling with source code.

Are you interested in the AppCode templates I use?

The Xcode 5.1 update proved to be more exciting than I anticipated. And I mean “exciting” in the sense of “breaking the tools I use.” xctool stopped working, and so did my code coverage scripts.

Hole by Bart Everson, used under CC BY 2.0 / Cropped original and added logo and title

(Lesson learned: Always download the developer preview and give it a try, before running Software Update…)

Facebook updated xctool. And I’m happy to say that XcodeCoverage now works with Xcode 5.1! Thanks to my coworker Mike Maietta for figuring out how to create a wrapper around the new gcov so that it continues to work with lcov.

Your coverage numbers may change slightly as you use Xcode 5.1 — but not much. And we don’t need the __gcov_flush() workaround anymore. Hurrah!

Update: Apple took this to heart, and fixed things in Xcode 5.1.

Bug or feature? “You have to call __gcov_flush() to collect coverage data with the iOS simulator.” According to Apple, this is a feature. But not if you actually want to measure your code coverage.

Code coverage… oy vey! Back in the days of running on iOS 6 using Xcode 4, measuring code coverage for unit tests was fairly straightforward. A set of coverage scripts I published made it easier still.

Then along came iOS 7 and Xcode 5. Coverage still worked if you continued to run on iOS 6. But on iOS 7, you’d get “ERROR: no .gcda files found” indicating that coverage data wasn’t being captured. “Well, maybe I need to switch from SenTestingKit to Apple’s new XCTest framework.” Nope, that didn’t help.

Whenever test code has repeated patterns, there’s an opportunity to make it more expressive and readable. This can sometimes be done by creating a new OCHamcrest matcher.

“hasProperty” is something of a misnomer, because it’s not just for properties. Any method, without arguments, that returns an object, is fair game. But I couldn’t think of a better name; I think it communicates well. Let’s take a look at a before-and-after code example.

Unit test code is often tricky to read. Test output is often hard to read. There’s got to be a better way.

Hamcrest is an important tool for writing unit tests. It’s now a standard feature of jUnit, and lets you build test expressions that are expressive and readable:

Since Quality Coding focuses on iOS development, I’ll write about OCHamcrest on this blog.

…But Justin Shacklette beat me to the punch! His post Intro to OCHamcrest is a nice overview. He introduces the many “matchers,”  illustrating them with code samples. He even makes special notes to call out areas that might trip you up.

I’ll eventually write about OCHamcrest myself. Until then, go check out Justin’s writeup.

See also: How OCHamcrest’s “hasProperty” Can Make Your Tests Simpler

Update: Apple took this to heart, and improved the unit test template in Xcode 5 and greater.

Wouldn’t you like your unit test development to go faster? Let me give you a better file template.

Apple’s template puts cruft in your project. Cruft slows you down.

What’s wrong with Apple’s unit test template? Depending on which version of Xcode 4 you’re using, the template can be unnecessarily complicated, due to a distinction between logic tests and application tests that no longer exists.

But the template’s description reveals an ongoing problem: “An Objective-C class containing an OCUnit test case with a header.” A header? What for? 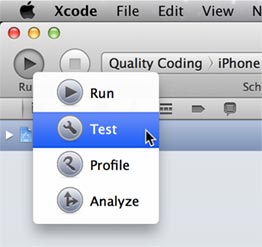 Xcode unit testing is now fully integrated into the UI!

Before Xcode 4, I recommended adding third-party unit testing frameworks such as Google Toolbox for Mac (GTM) and GHUnit. But with Xcode 4, the out-of-the-box tools are mostly sufficient. I say “mostly,” because it’s still a mix of the good, the bad, and the ugly. But, mostly good! Read on for a rundown of the pros and cons…

How Remote Mob Programming Is Working for Me
Learning Kotlin Showed Me the Truth About Xcode
Why Is Random Order a Big Deal for Test Quality?
Joy! Xcode 10 Promises to Improve Test-Centric Workflows
How to Use SwiftLint for Clean, Idiomatic Swift
Automatically Generate Swift tearDown with This AppCode Plugin